Chances are you'll never "make it" on Medium. It's just gotten way too crowded. The competition is too big. Too many people writing amazing stuff.

And it's not like that since a few months. It already was kind of too late when I joined the game about a year ago..

And whenever you're late to the game, when the chips are down and the audience already picked their favorites it's super, super tough to gain traction. To make up some ground.

Not to say it's almost impossible. And simply creating great content just isn't enough anymore. You've got to come up with fresh ideas on how people will find out about you. How they will notice that you even exist.

And simply pitching your stuff to Medium publications doesn't work either. Because most publications feed off their contributor's audience.

Did you ever recognize the header size of publications? The branding is huge. The bigger the publication, the bigger usually its branding.

And whenever you add your post to a publication the first (and probably only thing) your audience will see after they clicked on the link is the branding of the publication. And not yours. I've done small tests because I wanted to see how this affects people's behavior.

And about 10% of the people who follow me also started following a publication I started myself. It was like that for almost every post I added!

Well, you won't get access to their audience. It's as simple as that. And that makes it even harder to build an audience on Medium. That makes the hustle so real.

Again, good content won't help you to get traction on Medium. Only hustle will.

So what do I mean by hustle?

I don't know what works for you. But when I started I added hundreds of people every single day. Because I knew that no one would magically find out about me.

And then some people followed me back. Checked out my page. Maybe recommended a post or two. And then I started posting one article on Medium every single day. This helped me to go from 5,000 views to 30,000 views a month. Unfortunately adding people doesn't work anymore. Medium limited the amount of people you can follow every day.

Another thing I did was that I signed up to Medium with my Twitter account. I have more than 50,000 followers on Twitter. How did I get these? The same thing I did on Medium. I added 1000 people every single day. For a year or so.

When I started writing on Medium, I already had an audience of more than 1,000 people before I even wrote a single post.

What I also did (and still do) is that I simply add all of my Medium articles to a publication called Thought Pills. It's a publication for my content only. No one else ever contributed to it. It has almost 12,000 followers as of writing this.

Oh and by the way, when someone follows your publication you can send them a so called letter. Which is basically a private message. Did you know that? That's pretty damn powerful...

Look. These are just a few things I did to build an audience and get some traction on Medium.

So if you thought simply writing and publishing great stuff on Medium is enough, think again.

The hustle is very real!

P.S. Over the past few months I've been putting together a guide on Medium with all of my best knowledge, tips and techniques in it which I will release in 10 days. If you're interested, you can pre-order it here. 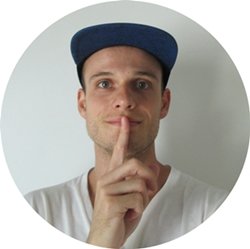