I’m everywhere and nowhere. And I own nothing and everything.

I’ve basically lived out of a backpack for the past 7 years.

It all started in 2009. I moved to Shanghai as an exchange student. I planned staying there for a few months . And those few months turned into almost two years.

I started a clothing company. Which my partner and I had to shutdown because it didn’t work out. I also taught English on the side because I needed to make some extra cash.

Because cash is king. Always.

And when you’re starting a company and want to be able to pay for food at the same time, the only thing you really need is cash. Everything else doesn’t really matter.

During those two years I basically lived out of a backpack with less than 10kg of stuff. That’s all I really needed. And it was still too much stuff.

I lived at four or five different places during those two years . I don’t even remember all the places anymore. I lived there with other people so I never paid more than 250 bucks rent a month. All places were furnished. I never bought furniture in my life.

One place was taken over by a pimp and his hookers while I was in Germany trying to figure out how I could get my degree. In the end I got my degree. But I didn’t get my shoes back. Or my electric shaver. And a few other things.

So for the next few months I was always looking at people’s shoes to maybe find that guy who took my shoes. I never found that guy. Or my shoes…

In 2011 I had to move back to Germany because I was using more money every month than I was making. A clear sign that something is wrong. That your business might just not be working out. Ever.

So I started working for a big corporation. I lived in many different places for the next 18 months or so. Cologne, Munich, Berlin and New York. Again, I was basically living out of a backpack. In furnished apartments. And saved basically almost everything I made.

Luckily that apartment in New York was paid for by that company. I would never have been able to pay for it. I liked living there. A lot. Especially with all the restaurants in Hell’s Kitchen, the area where I lived.

And you know what?

I’m writing this piece right here while sitting in a coffee shop in Bangkok. The real Bangkok. Not I, II or III. The real deal.

I moved back in with my girlfriend of that time where I lived for a few months. Until we broke up. I think I’m a terrible roommate. And I have the tendency to just move in with people without them even realizing it. Until it’s too late. For them. For me. For everyone.

A friend of mine has a sticker that says “I like to be alone but I don’t want to be lonely.” I think that’s very true for most of us…

So some time between moving back to Germany and moving in with my girlfriend of that time I quit my job and started working on my first book. I didn’t know anything about writing back then.

And I still don’t know a thing about writing three years later.

On the flip side I made around $5000 with that book. Not a whole lot. But still a lot more than what an average author makes with an ebook. A lousy $300.

So I had to move back in with my mom where I stayed for a while. And I still stay there whenever I’m in Germany. Simply because I don’t own any furniture. Also, I don’t feel like paying 4 months of rent just to be able to move into a new place. Without furniture…

And once that first book was done I decided to travel a bit. After all I didn’t have anything or anyone holding me back in Germany. I didn’t have a job, no girlfriend and my friends were basically busy working all the time.

So I traveled across Europe and gave talks in all sorts of countries that I’ve never been to before. Why? Well, simply because I wanted to see how it was like.

I went to the Czech Republic. To Poland. To Hungary. To Slovenia. To Romania. To Serbia. To Bosnia. And a few other places in the region.

I spent less than $600 a month and covered close to 9000km by bus and train. Some folks paid me to give talks. Some didn’t. But that didn’t really matter that much.

What mattered was that I did something just because I felt like doing it. For no particular reason at all. Just because I could. And I think that’s the secret.

To what? To all of it I guess…

We all can, if we really want to.

So once that tour was over I continued doing whatever I felt like doing. Just because I could.

And ever since I’m everywhere and nowhere. And I own nothing and everything…

Find out more about what I’m up to by following me on Facebook or on Twitter @girard_yann. Books and other things are here. 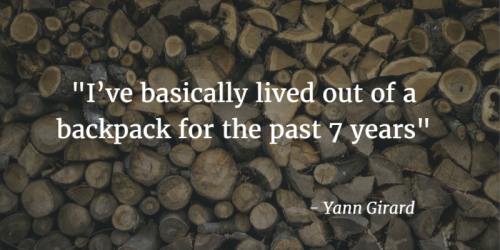