"Back home we sometimes say we would like to have coconuts instead of oil", he said. I didn't understand right away. So I asked him what he meant with that.

And then he asked me why I thought Iraq was basically always under siege or war mode for the past 14 years or so. Maybe even more. I'm not good at history. So I don't know what was going on there before.

But from what I can recall, not too long ago they had the Taliban. Then the US. And now IS. I don't know if they were all there for the same reason. He said they were.

So I said I don't know. Maybe they were all there because of the oil.

And whatever happens next, whoever is going to occupy/save Iraq next will do it for the same reason. They will do it because of the oil. Because of the business. That's what he said.

Apparently Iraq has the world's second biggest oil reserves on the planet. After Saudi Arabia. I don't know about that. But it sounds like a hell lot of oil. And looks like a hell of a business.

And then he went on, "That's why me and my friends back home we usually joke about having coconuts instead of oil. Then all of these strange people would stop coming over and would stop trying to take over our country." He looked dead serious when he said that.

And then he asked me what I thought why Africa seems to be such a mess? I don't know if it's a mess there. I've never been there. But I said probably because of the gold , the diamonds and all of that kind of stuff.

And he said, that's right. It's always about business.

I asked a hell lot of more things and we talked for two hours or so. I don't watch the news so I wanted to know what was really going on down there. How it's like to live there. So he told me all about it.

I asked him what he thought when they would have peace in Iraq. And he said probably when the world stops using oil.

And when it was all over, when I was too tired to ask more questions, we shook hands and he invited me to come over to Baghdad. I wholeheartedly declined and we went separate ways.

And then I met a semi professional ultimate fighter from Turkey who lives in Amsterdam.

But that's another story... 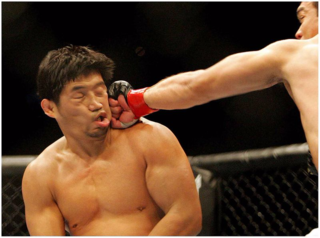