« The optimization trap | Main | Leave that map at home »

Why no one reads your stuff

Most of the writing advice out there is complete BS.

No one will read your stuff just because you include pictures.

No one will read your stuff just because you use infographics.

No one will read your stuff just because you format your text nicely.

No one will read your stuff just because you leave a comment on someone else's stuff.

I know. It's nice to believe in all of this. Because it sounds so easy. It's like someone's giving you a map. And we all like maps. It feels like you're in control. It feels like you can achieve anything. And get anywhere. When in reality, writing doesn't follow any maps.

All I've got to do is to follow this list, tick boxes and that's it. People will magically discover me, read my stuff and I'll get famous.

Unfortunately, that's not the way it works. When you follow a map, a guidebook or whatever all you're going to do is to go to the same places everybody else is going to. You'll never find the hidden gems.

The thing is this.

The ONLY thing you need so that people will read your stuff is an audience.

BUT only if you already have an audience.

So how do you build your audience? Your following?

Everybody who tells you that you need to use pictures is talking BS. Why? Well, because EVERYBODY is using pictures. Everybody reads the same advice. And if you use pictures, nobody will even notice. Or even care.

What's true though is that pictures, infographics and all of this stuff increases the amount of people reading content from someone who ALREADY has an audience. But where there is no audience, there are no readers.

The only way I see how you could get more readers (and not having an audience yet) is by using pictures of naked women. Which I never did of course. But feel free to give it a try..

A lot of people tell you to comment on smart people's posts. But the problem is that you need to read all of their stuff and then really understand that smart person's post first. And then you have to think about something smart to respond.

And that's a hell lot of work. It's probably more work than writing a standalone piece of content.

And that's why most of the comment people leave on other people's posts are just meaningless jibber jabber. You can clearly tell that most people didn't even read the intial post. So whenever you feel like commenting on someone else's post, put in the work. And don't waste your and everybody else's time.

What I mainly do and care about is that I produce my own stuff. I never even read other people's stuff. This helps me (or I think it does) to create original thoughts. To be creative. And innovative.

Level up your writing skills!

I've put together all of my best advice on writing into a single book. You can download it for free below...

Ok, you don't have to insult people. Please don't insult people. But you have to generalize like crazy. You have to say things and already know that some people might not agree with you. But it doesn't matter. What matters is that you have an opinion. And that you show it.

That's why 99.9% of the people say the exact same things everybody else already said hundreds of times. That's why no one REALLY reads your stuff..

Every month I add thousands of people on Twitter. On Medium. And on Quora. Why? Because no one will magically find out about me. About my work. And my ideas.

Ideas don’t spread. You need to make them spread..

Too many people are obsessed with analytics and optimizing stuff. How much time people spend on their blogs. If they finish an article. How many minutes they watched of that YouTube video. How many returning visitors and so on.

I don't even know how much time people spend on my blog. Or how many articles they read. Or if they even finish them. I installed Google Analytics more than a year ago. I've checked it maybe twice.

All I know is how many people click on my site and sign up at the end of the day.

Everything else doesn't matter. At least not for me. Because what's going to happen when you obsess about analytics is that you'll think that something is wrong with you. Your stuff. Or the way you write.

Because the audience who listens, reads or watches that kind of stuff is already taken. It's already taken by that person who came up with his own style, that everybody else is now copying..

# not more than two lines

The first two lines are the most important ones in your writing. Just like the last two lines. Take a look at what I wrote in the first two lines. If you're still reading this, it's very likely that those two first lines were what made you read this article. Why? See above and below..

Most people use list posts wrong. If you have a list post, the first thing (and usually only thing) people will read are your sub headlines. If these sound boring or like something someone else already said a hundred times, people won't continue reading your content.

That's why my first sub headline is super provocative. That's why I try to keep most of my sub headlines fresh. Sure, I exaggerated a bit in here for demonstration purposes, but the fact that you're still reading means that it works.

Because reading is a lot easier than writing. You don't have to make your brain sweat. You just sit back, relax and enjoy the show. That's why I stopped reading in 2015. To make my brain sweat some more. And to find my own voice..

Write every day. It'll cost you a lot less time and resources than writing maybe once or twice a week. If you write once or twice a week, you mostly spend the rest of the week thinking about when to write, what to write about, if people will like it and many other meaningless stuff.

When you write every day, you'll HAVE to reinvent yourself. Because some days you might just not have the time to write a two pages long list post. Maybe you only have 5 minutes to write down a few thoughts of yours.

Sometimes it really is about quantity instead of quality..

Writing follows its own rules. There are no rules. Everything I say or write doesn't really matter. It only matters to me. And applies to me. It doesn't apply to you. What matters though is that you get out there and start creating your own rules by not following someone else's rules.. 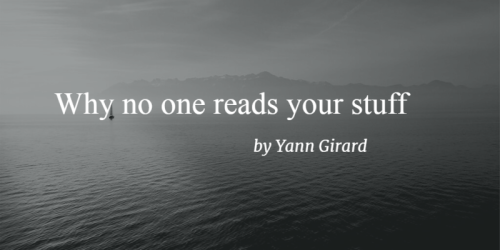