Blogging is dead. Just like every other form of creative expression is.

You don’t make money with blogging, writing, making music or with any other type of creative expression anymore. Those days are long gone. It doesn’t work anymore.

People don’t pay for art anymore. And the “artists” people pay for are the top 0.1% out there. 99.9% of the authors, bloggers, musicians or whatever won’t see a thing. Ever.

I never made a single cent with my blog. Making money through ad networks doesn’t work anymore. Maybe they do work for people that started decades ago and have millions and millions of visitors every day. But it doesn’t work for most of us. For you. For me..

I barely made anything with the books I wrote. With every book I sold I made less than 2 bucks. The average ebook earns an author less than $500. Considering the time and energy it takes to write a book it’s ludicrous to even consider writing at all.

And it doesn’t stop here. The same with music.

After 50 Cent filed for bankruptcy he told a New York judge that he only made 10 cents a record. 10 cents a record? WTF.. Even though he sold 38 million records he’s only worth 4 million. And he’s one of the most popular artists out there..

Nobody really makes money anymore with any type of creative expression. Even Dr. Dre doesn’t make money with his music anymore. He was smart enough to start his own headphone company a few years ago instead of making music.

When Dr. Dre sold his company to Apple he became Hip Hop’s first billionaire. Not with music. But with headphones..

Still, dozens of people ask me how they can become a full time blogger or writer, make a living with it and quit their jobs. I don’t think this works anymore.

Focusing on just one thing doesn’t work anymore. Nowhere. No matter what you’re currently doing. To be able to make a living being a writer, a blogger or whatever you need to build a business around your art.

Or you do it the other way round. You can also create art to promote your main source of income. It works both ways.

Even one of the best writers and bloggers out there, James Altucher, only makes 30 cents with every ebook he sells. So he started a publishing company on the side. And dozens of other companies. And invested in dozens more.

Or you can leverage your name and start a headphone company like Dr. Dre did. Or a clothing company like Jay-Z did.

What matters is to realize that all forms of creative expression won’t help you make a living. I had to learn it the hard way. Over and over again. With every book I wrote.

The way most artists make money these days is not by creating art. It’s by creating art that helps them to leverage and promote their main source of income.

Be it a digital agency, an online course, a coaching or consulting business, speaker engagements or what not.

The traditional artist, blogger, writer or musician as we know her is dead. We killed her a long time ago. Welcome to a new era. The era of the artrepreneur.. 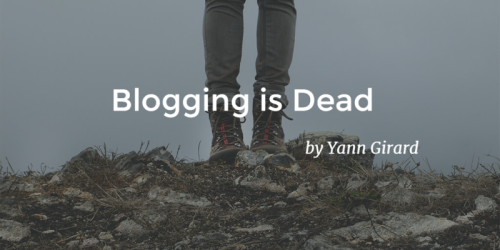