« How to become a failure machine | Main | Stop outsourcing your life »

The incentive matrix: The one thing every Entrepreneur should know

The number one advice you get these days as an entrepreneur is to solve problems. That's what you'll read in almost every book, hear at every startup weekend and what every investor will tell you. Always.

But to me this advice is worthless. As a matter of fact, after having worked with 1000+ entrepreneurs at all sorts of events, I realized that this really is useless advice. Because it leaves out a very crucial part.

It leaves out the fact, that we humans tend to prioritize things. Especially when it comes down to problems. Our days only have 24 hours and our mental capacity is quite limited (as well as our budgets).

As Jay-Z famously said “I've got 99 problems but a bitch ain't one”.

Assuming that we all have 99 (or more) problems, we have to prioritize them. We can't possibly solve all of these problems at the same time. Hence, we tend to categorize our problems into the following categories:

And that's what people usually don't tell you when they want you to solve problems. Just solve a problem and you're good. But it misses an important point. The point that not all problems are in the first category.

It misses the point that people prioritize their problems. Of how important and how pressing it is for your customers to solve the problem you're addressing. And if it's not in the first category of problems, if it's not a top priority, people won't buy it, download it or what not. At least not right now.

If you're in the second category, or in the third or fourth, they might buy it in a few months. Or in a few years. Or never. Who knows. Assuming that you're cash strapped and not Elon Musk and don't have a few millions (or billions) on your bank account, that's probably not a good way to go.

You can't wait that long and don't have enough cash to just wait it out.

[Related: The 14 Micro Skills You Need To Survive The 21st Century]

The secret sauce are incentives. If you're able to incentivize people, to push people's buttons, you'll be able to catapult your problem into the first category. As a matter of fact, there is a very limited amount of incentives that you need to know and understand.

If you're planning to sell your product to customers (B2C) the best incentives are as follows:

If you're planning to sell your product to businesses (B2B), the incentives look a bit more different:

There are many other incentives, but these are usually a lot harder to convince people and it might take a lot more time. These other incentives (for B2C) include all sorts of emotional triggers, such as loneliness, depression, boredom and so on.

To better understand how you can increase the odds of people using or downloading your product, I came up with this neat little matrix. The incentive matrix. Let's take a quick look at it. Feel free to build a consulting business around this. Also, feel free to wire 10% of your fees to my bank account. 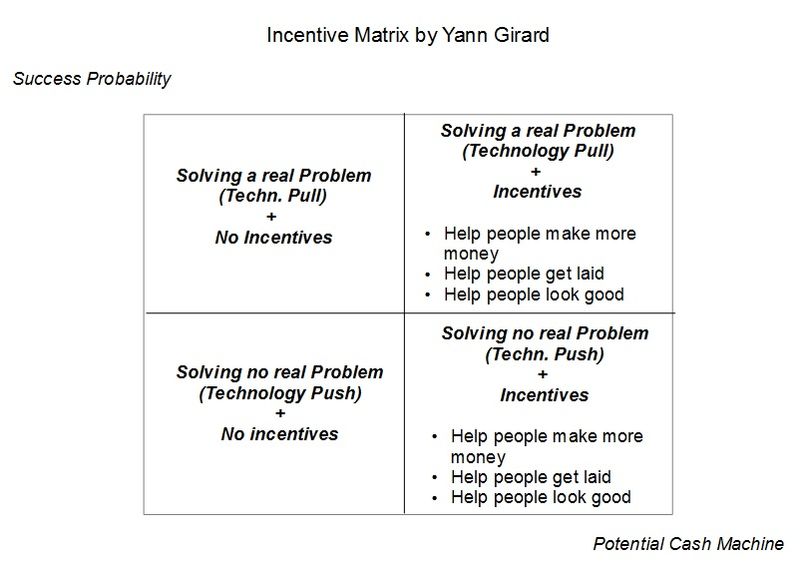 There are four different categories. There might be more, but I didn't want to make it more complicated. So let's take a look at each and every quadrant individually, so you'll better understand what I'm talking about.

#1 SOLVING NO PROBLEM + NO INCENTIVE

This is the most obvious category. This is usually an idea you have that you build and then throw it on the market. It will never be a success and never generate any money. There might be some lucky punches though. But I wouldn't bet on it. Unfortunately, most products still fall into this category.

People come up with ideas they believe the market might want, ask a few of their friends for feedback (which is always positive), build them, throw them on the market and hope that people buy it. Unfortunately that never works. Trust me. I tried many times myself. It's all about the market today.

Building great products the market isn't interested in (or willing to pay money for) is useless and a waste of time..

I know this sounds crazy but you can actually make a lot of money if you're just incentivizing people without solving any real problems or problems other people are already solving. These things are called information products. The information product industry is one of the biggest out there.

None of these things solve any real problems but you can still make a hell lot of money with them. Take a look at all these e-books, online courses, apps and so on that all want to help you to make more money, have more sex and look great. There are millions out there.

Unfortunately the competition is pretty tough so the success probability is pretty low. But if you know what you're doing, if you're a marketing genius, this can be an absolute cash cow. Not recommendable for beginners though, I would say..

#3 SOLVING A REAL PROBLEM + NO INCENTIVES

Let's assume you found a real problem but you don't provide any incentives. That means that you might not be in the first problem category. You might not be on top of the priority list. You might be one of the 99 problems. If your problem isn't on priority #1, you have two choices.

The first one is that you wait until all other priorities that are higher ranked than yours are solved, which basically means that everybody else will cash in before you will. This means that you might be successful at one point but it might take you a hell lot of time.

Or you make sure that you combine solving the problem with one of the above mentioned incentives. This is part of the next quadrant.

If you solve a real problem and you combine it with one of the above mentioned incentives you'll have the highest chance of winning the game. Now don't get me wrong. You still need an A+ class team to get it right. That knows how to execute things.

But this is the stuff you should try to keep in mind when you start off. Always.

Combining a real problem with incentives will even work when you have a problem that the market isn't even aware of.

So how did they solve it in the end? They found a way to incentivize people & businesses to use and implement PayPal.

They gave individuals $100 (or less, I don't remember) when they signed up to use for PayPal payments. Who doesn't want $100 for free, right? At the same time they approached online shops to accept PayPal.

They created a bunch of Ebay accounts that bought all sorts of items from Ebay top sellers and asked them if they could pay with PayPal. As the power sellers wanted to stay power sellers, at one point they simply pushed for PayPal integration.

To sum it up, if you're building a startup, a product or have an idea, try to not only solve a problem. Try to combine solving a problem with incentives. Incentives are the way to increase your chances of success.

Incentives are why people will download your app. Combining incentives with solving a real problem is your way to get noticed among the 1600 apps that are being released every day. Your way to stand out.

Think about yourself. If I told you that you could make money without any risk involved, wouldn't you do it? Of course you would.

That's why everybody is publishing books on Amazon right now. That's why Udemy has thousands of courses. That's why Uber spread so quickly. That's why Affiliate platforms are so huge.

They solve a big problem and offer a huge incentive at the same time. They all help people to make more money..

To sum it all up, try to keep the different incentives in mind. And ask yourself the same question over and over again:

It's not THE way to success, but it's definitely something worth keeping in mind. It's one missing piece of the puzzle..