« Waiting your life away... | Main | Being an Entrepreneur: The 6 Unusual Skills you Need »

The key to happiness

The happiest person I've ever met in my life wasn’t a millionaire, a billionaire or someone that won the lottery (I actually haven’t met any of those three yet, but it helps the story). It was a guy that works at the cashier at my local supermarket.

He seems to be the happiest, friendliest and most fulfilled person on this planet. I never saw someone being so passionate about doing his job. He talks to everyone, asks how their day was and usually lightens up my and everybody else’s day. It’s a gift.

Sometimes I even go and buy my stuff there just to see his friendliness at work. It fascinates me every time. But it also makes me wonder what his recipe might be, his recipe for happiness. And why so many people are chasing what he seems to have found.

Most importantly, he probably found it without ever having searched for it. Maybe one magic morning it just happened to be there. And I guess that might be his secret sauce.

The secret sauce that might help all of us to be happier and enjoy our lives even more (in case there is such thing as happiness).

We get the feeling that something might be missing in our lives. A feeling that could best be described with unhappiness. So we start the pursuit of happiness. A never ending pursuit...

This is something completely natural and human. So the question should be more about how we can stop questioning our own path and start living a happy life instead.

To answer this question let's take a look at this beautiful short story, which is a true story by the way (originally appeared in form of a poem in The New Yorker, May 16th, 2005):

An author was at a party on Shelter Island given by a billionaire. A friend came over to him and asked him how he felt that the guy throwing this party makes more money a day than he will ever be able to make with all of his books combined. And the author said, “Fair enough. But I’ve got something he can never have”. “Now what could that be?”, his friend was wondering. And the author replied, “Enough”.

Not having enough is the beginning of the vicious circle and the reason why we start comparing ourselves with others, start questioning our own path and feel like something is missing (although we might already have everything).

As soon as we start realizing the power of having enough we might get a step closer to finding the key to happiness. The key that the guy working at the cashier at my local supermarket has found already. The key we are all trying to find.

Read More: I’m everywhere and nowhere. And I own nothing and everything. 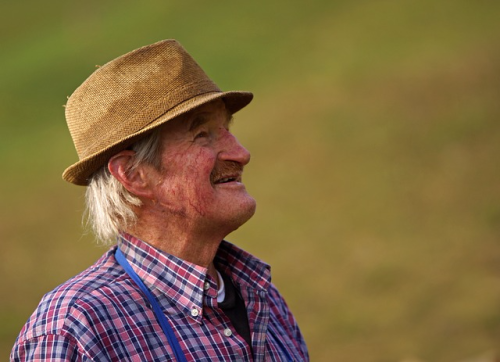